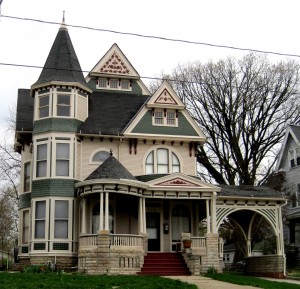 October! Welcome to my new website completely updated and re-built by Sue Fernandes who I recommend for friendly professionalism. I will be keeping you updated with all my latest projects and talking about the themes of my architectural life. There will be regular blog posts of my personal insights and observations on those buildings and places which have a message for all of us interested in the design of high quality architecture for our homes and businesses. September was rich with new enquiries, several new commissions and my architectural study tour to Chicago. So thank you to new clients in Bowdon and Macclesfield.

Here is a so called “prairie house” which revolutionary Chicago architect Frank Lloyd Wright regarded as the finest example of this new architecture.

It is called the Robie house, after his client, who made a fortune in the 20’s making bicycles. When you compare this with a typical house of the time you can see how radical a new design philosophy the “prairie houses” was. The new architecture is made from a few typical forms such as deeply over-handing roofs, horizontal emphases, for example bold eaves  strips of windows, and simple undecorated rectangular surfaces. The old is complicated with surface decoration and often refers to other architectural styles:- Look in this example for cylindrical forms originally found in military architecture and reproduced in French chateau and Scottish manor houses and also for a triangular classical pediment. In contrast to this is an arch too which adds to the recipe of styles served up.  Remember that both of these houses are three-storeys but this is far from obvious in Wright’s tiered massing.

One of the many themes in Frank Lloyd Wright’s architecture is the prominence and elaboration of the hearth. Fireplaces and their chimney’s are often positioned centrally in his plans. They are the core of the home in his vision, a warm inviting place to gather in retreat from the glazed perimeter of the house on cold winter nights.