……………………….Special influences shape the house in Japan since world war two. They stand out from influences on architecture common to all countries. They are:- 1. The desire for a distinct family home. 2. Lack of land which can be developed economically. 3. A big population. 4. Mass post-war rehousing need.  5. Historical house design. 6. Traditional skills in timber construction. 7. Earthquake risk. 8. The Modern Movement. 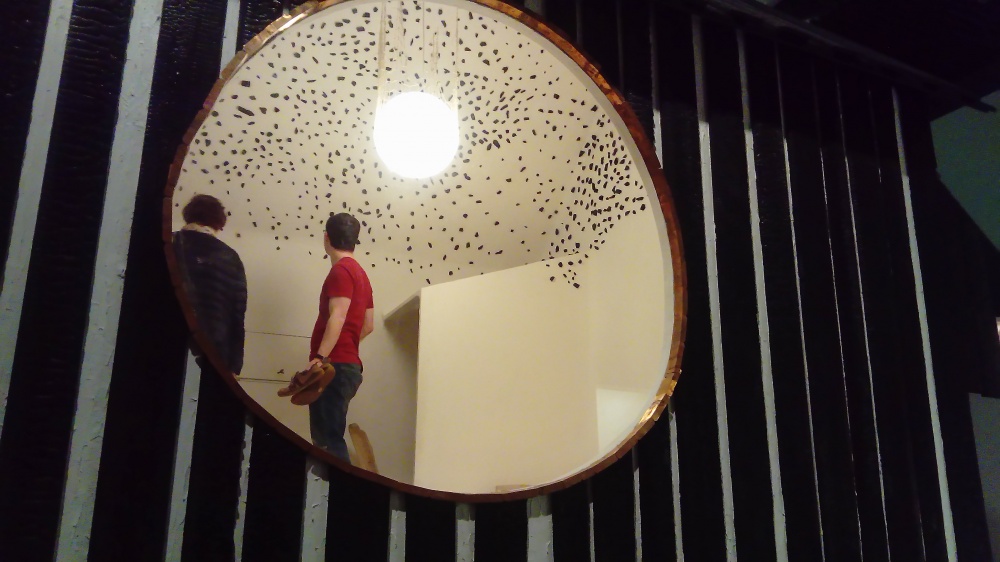 The Barbican’s tea house by Terunobu Fujimori. The black cladding is charred wood. The light sphere is suspended in netting as if the moon has been caught in the sea. Visitors enter from below through a trap door on a ladder. Shoes off!

The Barbican exhibition “The Japanese House: Architecture and Life after 1945” s0 entertaining. And deeply informative. Sponsored by:-

The exhibition detailed these special influences. Then showed their effect on houses and neighbourhoods. So we learn the effect of them individually and combined. Film, sound, photographs, scale models and animation. Highlights are spectacular. Firstly the full size recreation of the Morijama House in Tokyo.  Secondly an inventive new tea house. It was created by Terunobu Fujimori. He designed it especially for this exhibition. In summary this was an event for all. Not just for architects or designers. And even for children. For example the PG film screening on June 24th:-  “The Japanese House : Only Yesterday”. Finally you can still study rich intellectual content in the excellent catalogue. I am very grateful for both this primary source. And to all who created such a rewarding cultural experience. 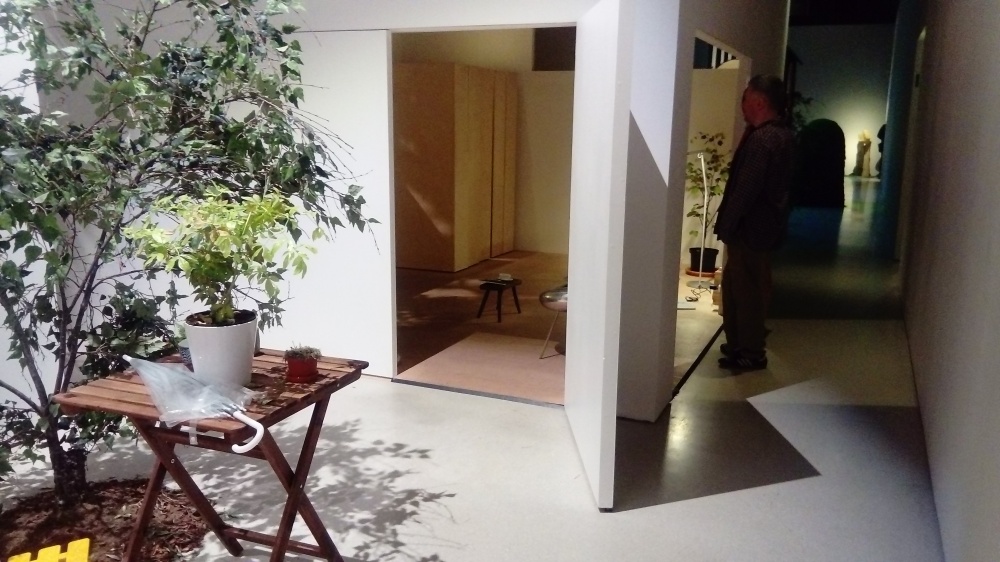 Reconstruction of Ryue Nishizawa’s house for Mr Moriyama, 2005. This is a metaphor for the city. Instead of urban blocks defined by streets individual living functions are accommodated in single building envelopes with external living spaces between them. An innovative de-construction for an enlightened client. He now has a setting for his creative life-style of contemplation.

The desire for a distinct family residence. This means you will not find many high rise towers. Sprawling apartment blocks are few. Instead you see tight clusters of two and three storey houses. They carpet precious flat land. Competing for it with transport, offices, farms and factories.

High housing density follows from two facts.  Firstly a lack of easily developed land. Secondly a big population. Much of Japan is mountainous. Therefore the thin coastal plain is totally developed. Never far from a railway, all land uses jostle each-other. So journeys to work are short. In a Tokyo address like Shibuya this means few open spaces. And narrow plots. The house is stacked like furniture.

Half of Tokyo burns in the war costing Japan 4.2m homes. Therefore post war housing needs were urgent and intense. Low cost, fast construction both essential. The result was pre-fabricated systems made industrially. For example the modular PREMOS house. You could buy a Panasonic house. Or a Toyota. And recently a Muji branded one. Kurokawa’s Nakajin tower of capsules is the most extreme example. 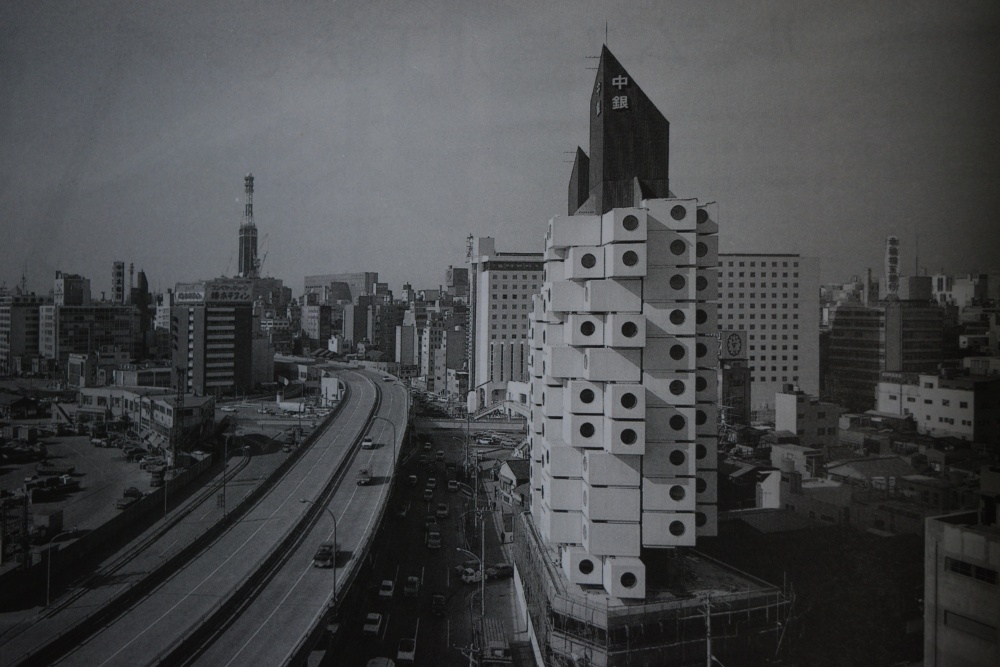 Architects are often inspired by past designs for the house. “Half timbered” semis in England are dwarf country houses. Homes of the Japanese nobility are also a reference. Kenzo Tange looks back to the shinden-zukuri style. But Shirai follows the rustic minka alternative instead.

The Modern Movement ideals of transparency and open plans seem to fit easily into Japanese traditions. The large scale of a Japanese mansion. Or the slender timber structure and walls of a farm house. Both can easily appear “Modern”. Czech architect Antonin Raymond fuses “Japanese” and “Western” spaces.

Yoshimira’s mountain lodge uses concrete instead of stone. An earth metaphor. Also timber. Security is easy thanks to its rustic base. The need for a safe calm retreat in cities leads to heavy construction. Security against the crowd and against earthquakes makes concrete an ideal material. Following this choice for building comes a robust appearance. The cave as house is re-invented in cement not stone. 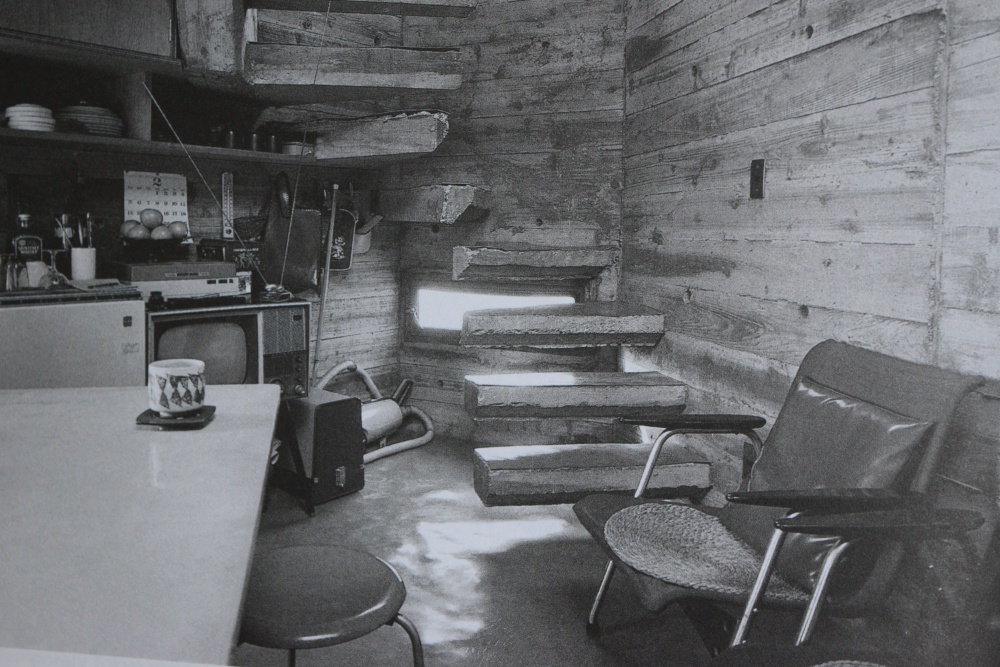 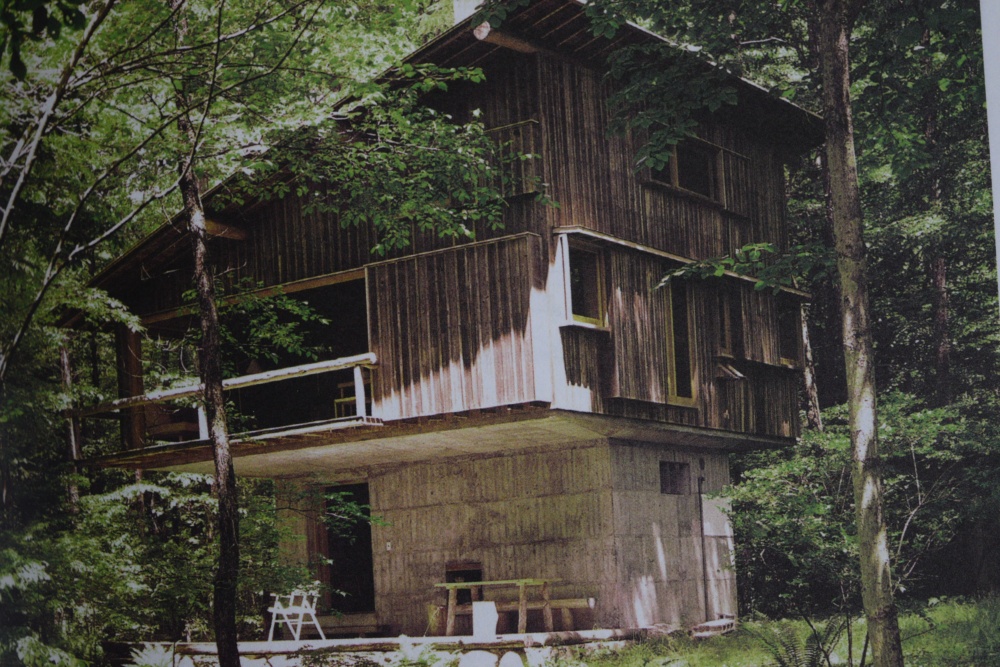 Mountain Lodge A, Karuizawa, 1963. Junzo Yoshimura designs in the timber tradition and uses mass reinforced concrete instead of stone.