This bride and groom are celebrating in Kyoto, 6000 miles from Macclesfield, but we are united under Nature’s floral canopy!

Ok it sounds cheesy I know but this is such a light-hearted image! Shot on my tour to Japan. A long way from Macclesfield. Architecturally rich. Such a happy time at stepson Dan and Ikumi’s wedding in Hiroshima. In cities and towns like London and Macclesfield we are used to space. Parks and squares are taken for granted. But these are rare in Tokyo. The ultimate example of Japan’s land use. Manufacturing, agriculture and living is packed onto narrow coastal plains. They are squeezed up to the coast by mountains. 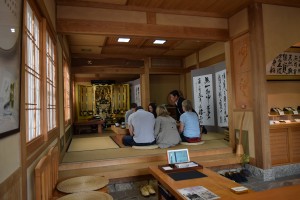 This is Ikumi’s parent’s showroom in Yoshiwa. A town in the mountains above Hiroshima. Mum and Dad, Uemoto-San and Oku-San, run a business growing Wasabi. This is a super hot version of horse radish. Bright green!  Eaten with soy sauce with most dishes, especially sushi and sashimi. Both uncooked fish. This interior cannot yet be found in Macclesfield. But the sunken table with central inlaid hearth. The translucent paper windows. The subtle change in level. The excellent joinery…..All to be imported by this architect to Macclesfield.

Macclesfield is a friendly town. But so were Tokyo, Osaka, Hiroshima and Kyoto. I couldn’t find  my hotel. So I ask in a cafe. An english speaking customer says Hi! Next I am in his porsche being taken there! Thank you Yoshikatsu San! Yoshi’s English is excellent, part of his success in California. Just back from filming a commercial for Toyota. Our languages are very different. But Japan’s railway system is bi-lingual. So a trip on the 180mph Shinkansen is easily booked. Like flying but with bustling towns and wooded hills flashing by! On a japanese express Macclesfield to Euston would take an hour. Quicker than the road commute to from Macclesfield to Manchester!