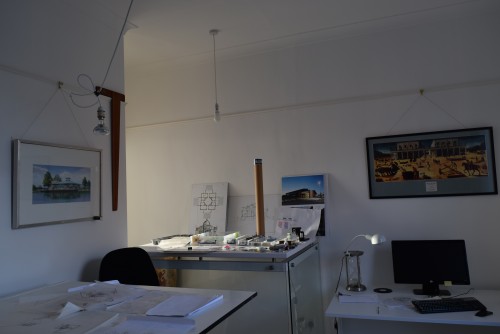 The new window, concealed here, is positioned using the wall to reflect light into the room.

The work place and home of Mark Burgess. Mark has been called one of Macclesfield’s most thoughtful architects. A traditional studio facing North but an interior window admits sunlight. This window is illuminated by an existing south facing window in the next room. The new window was added to a wall enclosing the stairway. This stairway was originally separate from the studio. But an opening was made in the separating wall. Through this opening passes sunlight. Falling into the stairway is prevented by a glass balustrade. Instead of a hand rail this balustrade supports a Corian work top. 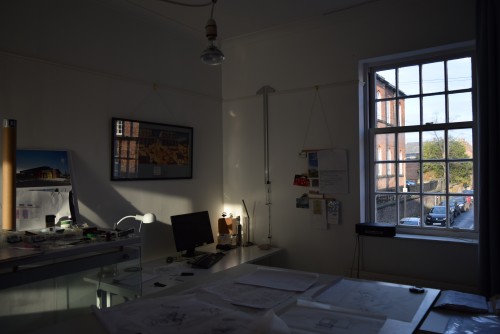 Sunlight now penetrates right through the house to the back of the studio.

This new interior is part of a comprehensive conversion. The architects studio was created in a former terraced house on Chapel Street in Macclesfield. It was one of six built in the ’80’s when the neighbourhood was designated a conservation area.  Park Lane CA is in the south of Macclesfield.  One of the town’s most picturesque. It includes Chapel Street, Lord Street and High Street. Nearby is the fine Wesleyan Chapel with a colourful stained glass window. Also you will find The Little Theatre.

The interior is designed as a neutral blank canvas for creativity. So walls and floors are all white. All lighting is functional not decorative. But outside this simple contemporary interior is a perfect interpretation of a weaver’s cottage. The house was selected for an architects home and studio because it is built to modern standards. So thermal insulation levels are high. This is a sustainable home work place. (Unlike the nineteenth century house it replaced which collapsed! ) The conversion included redesign of the kitchen and bathroom. These illustrate maximum use of space in a small house. The kitchen is designed for durability. So there are no drawers or cupboard doors in the stainless steel furniture.

The project was tightly cost controlled by the architects design decisions.  So there are few expensive finishes. But the whole composition is unified by careful choice of colours and textures. For example the concrete kitchen floor is floor painted. This provides the required hue and tone. But its also an easily cleanable stain resistant surface. So it functions as polished ceramic tiles would but costs half their price. Another example of economy is the interior window. This was originally conceived as a floor to ceiling glass wall. But a wall costs too much. Yet the alternative, a window,  transmits enough light to realise the original concept of transparency. There was no similar alternative to the glass balustrade and Corian work top. So these were retained in value engineering. In this way money is concentrated where it delivers value.

Thanks to Whitehall Fabrications in Leeds for the Corian counters  and to F & J Hauck in Shaw for the structural glass and steel balustrade. 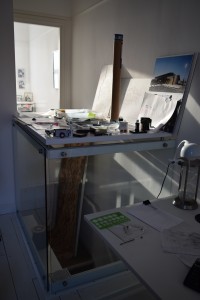 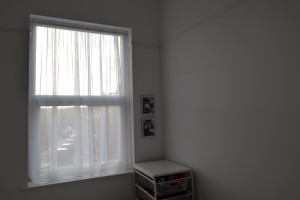 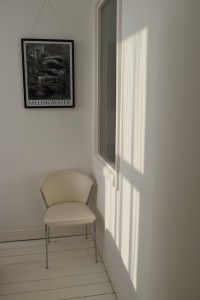 Sunlight from the existing window illuminates the new window.